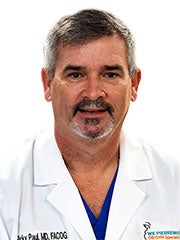 Ricky A. Paul, MD, FACOG, is an obstetrician and gynecologist at WK Pierremont OB-GYN Specialists. He specializes in minimally invasive vaginal hysterectomy and laparoscopy.

A native of Oakdale, Louisiana, Dr. Paul relocated several times as a child because his father was in the U.S. Army. Dr. Paul’s journeys continued as he pursued higher education and began his career as a doctor. In Monroe he completed his undergraduate degree in medical technology at Northeast Louisiana University. After a few years’ work as a medical technologist, he began his studies at LSU Health Sciences Center-Shreveport School of Medicine.

During medical school Dr. Paul developed an interest in obstetrics and gynecology thanks to the clinical and surgical elements of practice. His special interests are high-risk obstetrics and minimally invasive surgery, through which he develops close relationships with his patients.

A “patients come first” treatment philosophy comforts patients who know they can call him any time they want. Add to that Dr. Paul’s personal commitment to deliver your baby whenever it arrives, even if he is not on call, and you have an OB-GYN doctor who works for you.

In his free time, Dr.  Paul enjoys fishing, being outdoors and spending quality time with his children.