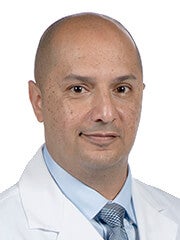 Dr. Michael enjoyed his time in Shreveport so much that he chose to return to the Shreveport-Bossier community after practicing Gastroenterology in California. He had completed his undergraduate bachelor’s degree in neuroscience at the University of California Riverside, followed by a master’s degree in Biological Sciences/Neuroscience at Cal Poly Pomona. From there he proceeded to Georgetown University School of Medicine in Washington, D.C., for a post-baccalaureate program. He earned his MD/MBBS degree from Ochsner School of Medicine/University of Queensland (New Orleans/Australia).

Following medical school, he remained at LSU Health in Shreveport for a Gastroenterology fellowship and where he was named chief fellow. This is just one of many honors including the American College of Physicians Internal Medicine Award of Excellence, graduating at the top of his medical class. He also received the Dean’s Commendation for High Academic Achievement during medical school.

During his academic career Dr. Michael served as a teaching associate and tutor and participated in several research projects on Gastroenterology subjects and delivered both poster projects and oral presentations. Several additional projects focused on quality improvement processes.

In addition to work as a physician, Dr. Michael has provided planning and support for his family’s international business and has also performed volunteer work in New Orleans, Los Angeles and Australia.

Dr. Michael and his wife have two daughters. When not busy in the office, he enjoys spending time with his family, traveling, cooking and a variety of sports, including tennis, golf and basketball.